Kristen Ledlow is an American game reporter. She is currently the host of NBA TV’s ‘NBA Inside Stuff.’ She has also previously worked as a game anchor for HLN and CNN. Initially, she played volleyball and was an All-American volleyball player in high school.

The reporter was born on January 18, 1988, in Atlanta, Georgia. She is 31 years old now. Her nationality is American. She is of unknown ethnicity. Capricorn is her astrological sign. Roger and Rita Ledlow, her parents, gave birth to her. Furthermore, she has not disclosed any information about her siblings. She attended Christian Community School, as she mentioned in her educational background. She then went to North Florida Christian School. Later, she attended Southeastern University in Lakeland, where she majored in broadcasting and communications and minored in business.

Who is Kristen Ledlow Husband?

Kristen is a newlywed. She has not yet revealed the identity of her husband. On February 15, 2019, the couple married vows. She does, however, post adorable photos of herself with him on Instagram.

Previously, she was involved with a b-ball player whose subtleties are unknown. There are no records accessible to her various connections. She is currently married and content.

Estimated Net Worth of Kristen Ledlow

As a result, she has not disclosed any information about her net worth in 2019. There is also no information on her salary.

Kristen is 5 feet 8 inches tall. She weighs 59 kg. She has lovely blue eyes. Her hair is blonde. Her body measurements are 36-25-37. Her bra size, dress size, and shoe size are not known. Finally, she is extremely active on social media. She has thousands of followers on Facebook, Twitter, and Instagram.

The reporter began her career as an All-American volleyball player for her school. She also filled in as the lead broadcaster for the men’s basketball games. During her senior year, she won the Miss Capital City USA expo. Kristen worked as a wrestler at WTXL-TV after graduating from high school. In the end, she facilitated the ‘Uplifting News Show.’

Kristen soon became a sideline reporter for Florida State Seminoles football games. She is also the co-host of CBS Sports Radio’s “The Opening Drive.” She worked alongside Jason Bailey and Randy Cross after joining WZGC as a host. She later left the station in March 2014. In 2015, NBA TV hired Ledlow to host ‘NBA Inside Stuff.’ 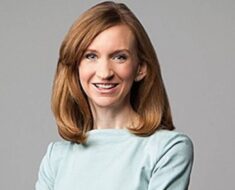